The Palace of Knossos, the largest of the Cretan palaces, and the city that arose around it are built on the top and slopes of the low hill of Kefala, where the River Kairatos meets the small Vlychia stream. Security, fertile land, water and proximity to the sea were the main reasons not only for the choice of the site as a place of habitation from earliest prehistoric times, but also for its subsequent prosperity and growth.

The first traces of habitation date back to the Neolithic period, when there appears to have been an extensive settlement on the site, parts of which have been identified in the “West” and “Central Court”. Parts of Prepalatial buildings have also been excavated in the “West Court”.

The first palace was built circa 1900 BC, following the levelling and landscaping of the hill. From the few parts of it that survive (“Magazine of the Giant Pithoi”, etc.), it seems that its basic layout was set out in sectors around the great “Central Court”. The water supply and drainage systems were already functional. The first palace was destroyed around 1700 BC and the new palace was erected in its place. It is this palace, with a few later additions, which survives to this day. 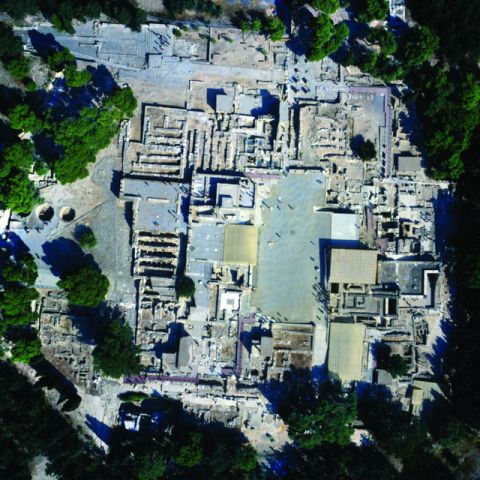 The new palace was constructed according to a specific architectural plan, similar to that of the other palaces, befitting its character and function as the centre of political, economic and religious authority. The main feature remained the Central Court, with monumental buildings rising around it, oriented N-S. There were entrances on every side, the most official being the Southwest and the North Entrance. The West Wing contained shrines, official halls and extensive storage areas, while the East Wing housed the royal apartments. There were also workshops, storerooms and other areas serving a variety of functions to north and south. They feature typical architectural elements of the period, such as polythyra (sets of rooms with multiple pier-and-door partitions on two or three sides) and lustral basins (small, rectangular, semi-underground rooms accessed by a small, L-shaped set of stairs). 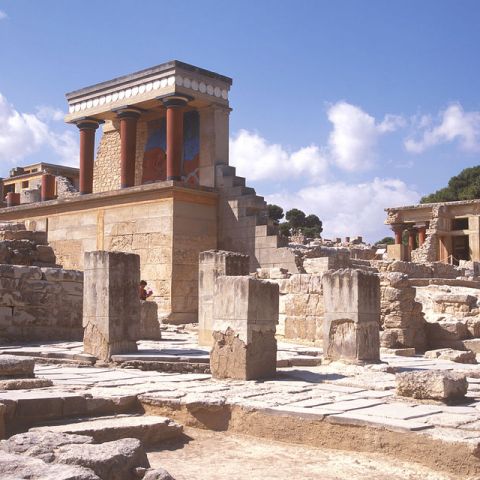 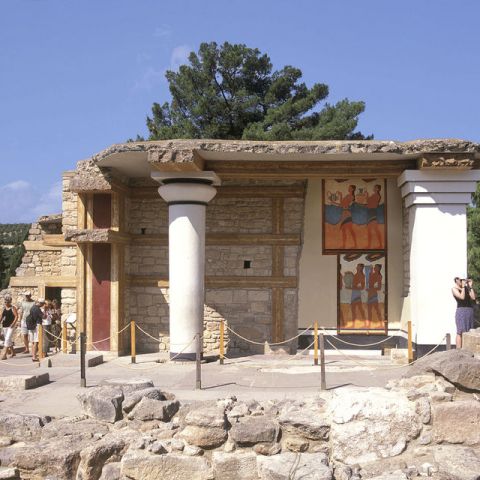 Indented façades, flat roofs of different heights crowned with double horns, and upper storeys (two on the west and five on the east), combined with the wide variety of colours and building materials, all gave the exterior of the Palace an imposing aspect. Poros-stone ashlars were used in the masonry. The floors were paved with slabs of green schist pointed with red plaster. The columns, beams and doorframes were made of wood. Gypsum slabs covered the walls (in the form of marble revetment) and floors, giving the spaces an air of luxury. Gypsum was also used for the bases of columns and jambs, seats, stairs, etc. The decoration of the rooms was supplemented by colourful plaster and frescoes. 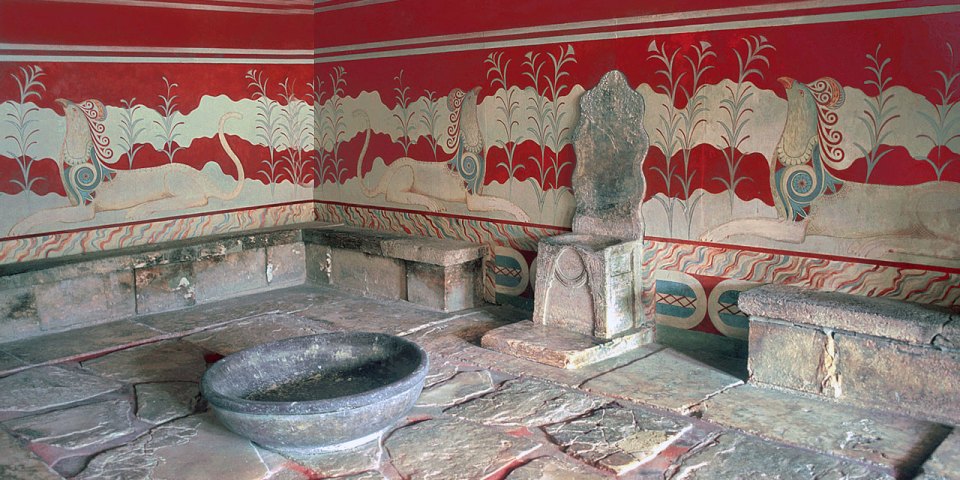 The Palace of Knossos was the only palace to remain in use after the destruction of 1450 BC, when the Mycenaeans settled Crete. The “Throne Room” and the surrounding apartments date from this period.

Following the final destruction of 1380 BC, large parts of the Palace were reoccupied and remodelled, mainly as private houses. The “Propylaeum” was turned into a storeroom and a room in the SE wing became the “Shrine of the Double Axes”.

The first excavations at Knossos were carried out in 1878 by a merchant and antiquarian from Heraklion, Minos Kalokairinos, who discovered part of the West Wing of the Palace.

Systematic excavations began in March 1900 under Arthur Evans, then Curator of the Ashmolean Museum in Oxford. Two years later, the excavation of the Palace was almost complete. Over the following years there were supplementary excavations, which were completed in 1930-31. After the Second World War, the British School of Archaeology continued the excavations with significant results, both in the area of the Palace itself and in the Minoan city surrounding it.

The necessity of restoring the Palace was evident from the first years of the excavation. The fragile building materials proved extremely sensitive to weathering. During the first phase of their restoration efforts, in 1905, Evans and his colleagues restricted themselves to protecting the ruins. After 1925, however, Evans attempted a radical reconstruction of the monument, with large-scale use of reinforced concrete. Upper storeys and architectural elements were reconstructed. The timber frames and wooden Minoan columns were made of concrete and painted to imitate the originals. The frescoes were restored and copies placed in different parts of the Palace.

Evans’s interventions provoked a variety of reactions. It was noted that the archaeological data on which the reconstruction was based were not always clear. In other cases, the ancient remains cannot be distinguished from the interventions. The reconstructions are irreversible. However, many people believe that the interventions were necessary for the preservation of the monument. Moreover, they attract visitors’ interest and make it easier for them to understand the architecture of the Palace. Others, on the contrary, believe that the interventions largely present visitors with Evans’s ideas and the dominant aesthetic and ideological trends of his time. Today, however, Evans’s reconstruction of the Palace forms an integral part of the monument and its history.

After the Second World War, extensive restoration work was carried out on the Palace by the Directors of the Heraklion Archaeological Museum N. Platon and S. Alexiou. This work was limited to the conservation of the ancient masonry, the restoration of the floors and the protection of certain areas with roofing.

In the 1990s, the Directorate of Reconstruction and the 23rd Ephorate of Prehistoric and Classical Antiquities carried out conservation work on Evans’s concrete.

The “Palace and Archaeological Site of Knossos” project was included in the 3rd Common Strategic Framework in 2000 and implemented by the Fund for the Credit Management of Archaeological Works (TDPEAE).

From 2001, the responsibility of coordinating both this and the project implemented under the National Strategic Reference Framework lay with the Knossos Scientific Committee.