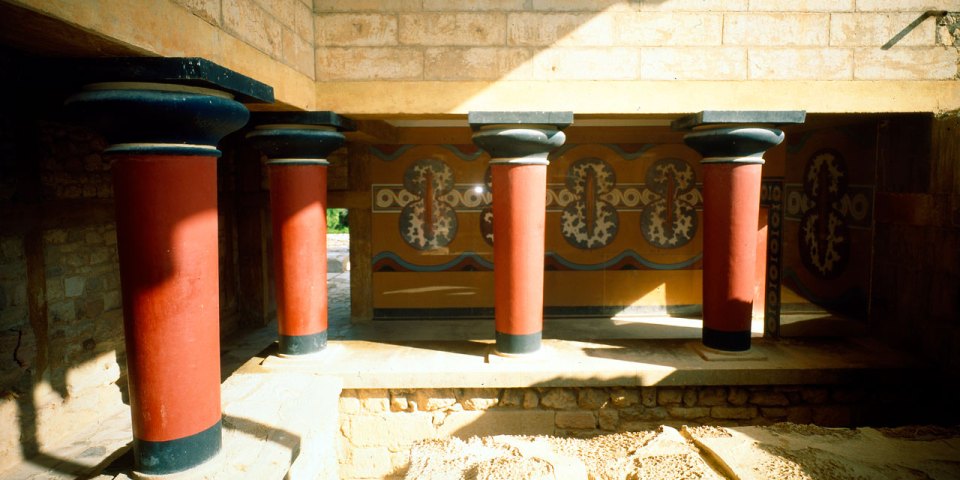 In the summer of 1901, Arthur Evans’s excavation on the east side of the Central Court of the Palace of Knossos led to an extremely important discovery: the “Grand Staircase”, which provided access to the wing housing – according to Evans – the royal apartments. This wing was built after the whole east slope of the hill had been cut away.

The “Grand Staircase” consists of two flights of stairs, flanked by colonnades, which are repeated on each storey. A large lightwell on the east side, surrounded by columns, provides the area with natural lighting. The columns on the stair side were placed in socketed bases, forming a stepped balustrade. On the other two sides, the repetition of the columns on the upper storey formed successive verandas or loggias, like that decorated with the copy of the “Figure-of-Eight Shields Fresco”. On the south side of the lightwell there were windows instead of columns.

Of the entire “Grand Staircase”, four sets of stairs survive today. The two upper ones have been reconstructed by Evans, while the two lower remain as they were found.

It is worth noting the width, low height and slight inclination of the steps, which make ascent and descent particularly easy.

The damage, which started to appear immediately after the excavation of the magnificent but fragile underground structure of the Staircase, made immediate protection and conservation imperative.

Evans’s colleague T. Fyfe originally undertook the restoration of the area, the conservation of the masonry and the placement of new wooden beams where the ancient wooden framework had been. However, all these efforts proved futile, mainly due to the adverse weather conditions. 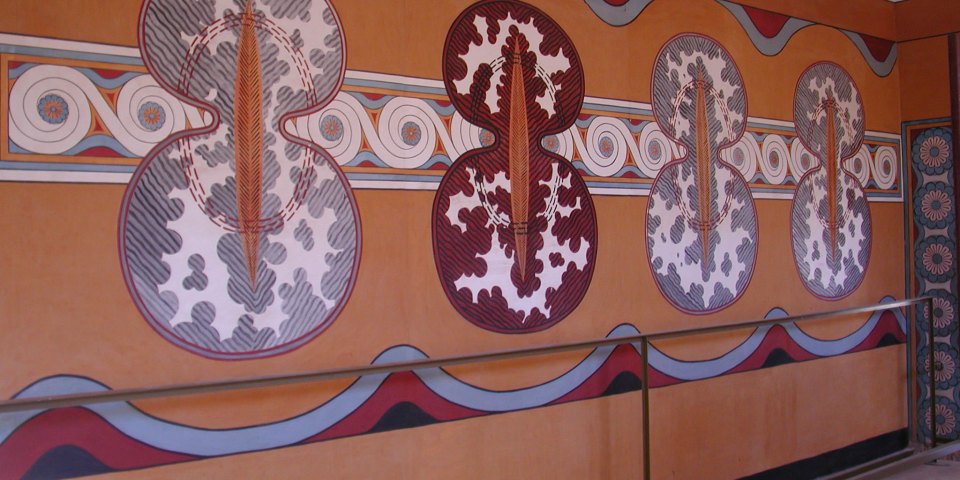 In 1904-5, the architect C. Doll took over the work. The wooden supports were replaced, the wooden columns became stone, the architectural members of the upper stairs were returned to their original positions, the flights of stairs and the “East-West Corridor” underneath were roofed with brick arches supported on iron girders. Finally, when the “Loggia of the Figure-of-Eight Shields” was reconstructed, the copy of the fresco restored by E. Gilliéron fils was set in place.

The “Grand Staircase” has been closed to visitors since the 1990s, due to problems of stability and serious damage to the ancient masonry, the gypsum, the Minoan plaster, and the roofs reconstructed by Evans, which consist mainly of light arches with iron girders, but also reinforced concrete.

In the context of the 3rd CSF, the masonry was restored, the lightly arched roofs with iron girders in the east section of the “East-West Corridor” were replaced, the masonry of the “Loggia of the Figure-of-Eight Shields” and the paintwork of Evans’s reconstruction were restored, and the visitors’ route from the Loggia to the “Corridor of the Draughtboard” was improved and extended. 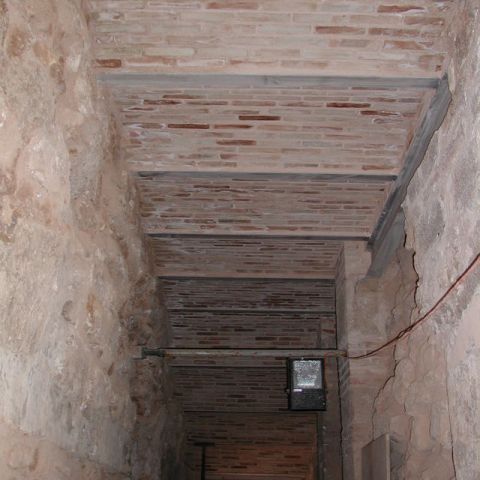 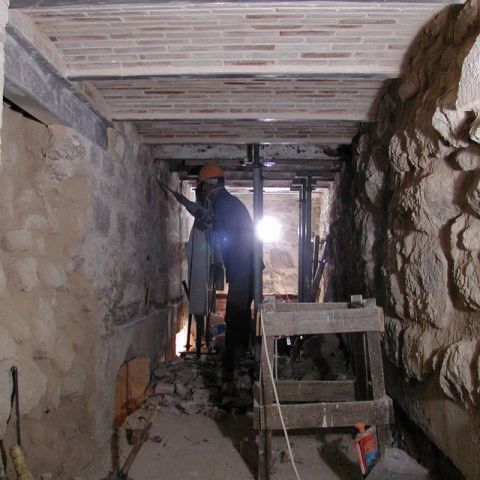 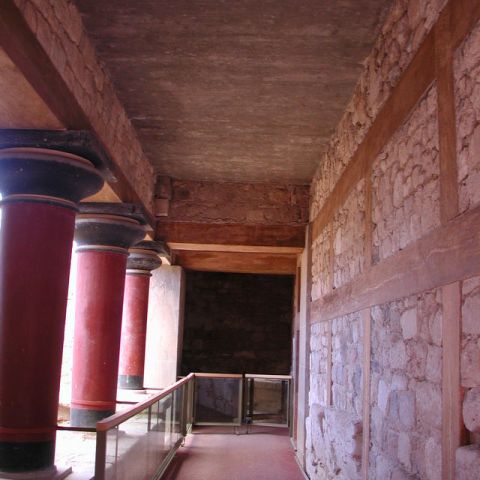 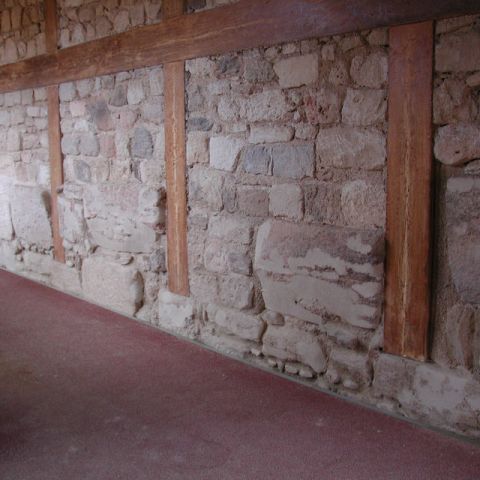 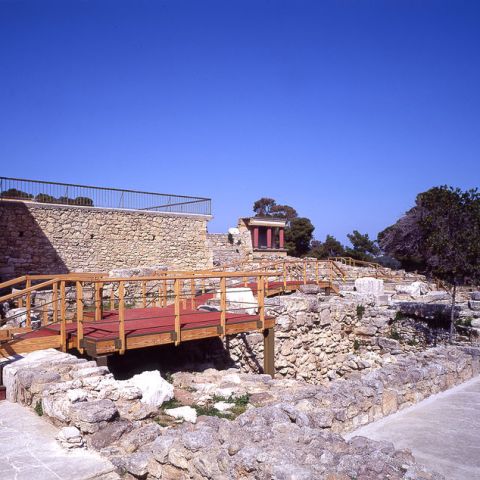 As part of the NSRF project, the masonry of the first and second flights of the staircase and the “East-West Corridor” were conserved, together with the limestone blocks that form the main building material of the “Grand Staircase”. Restoration interventions were also carried out on the Minoan plaster and gypsum. Their state of preservation was determined by the use of cement plaster in extensive earlier interventions. 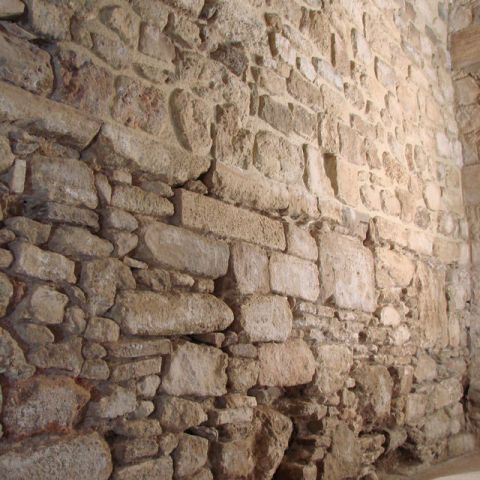 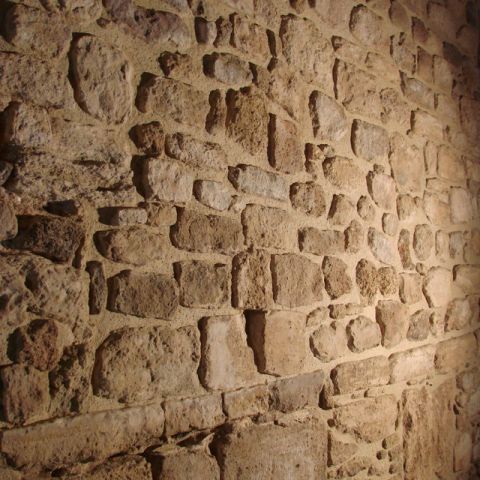 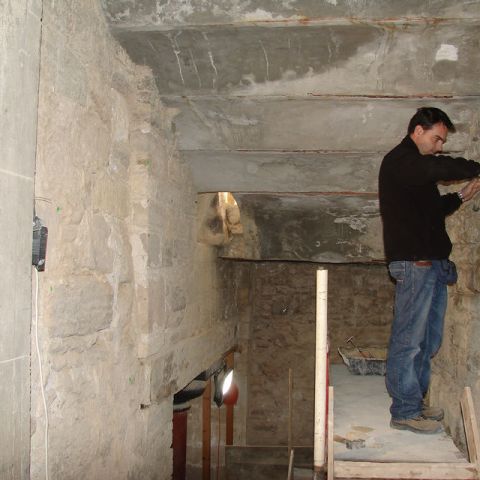 In this context, the balustrade of the “Loggia of the Figure-of-Eight Shields” and the gypsum slabs of the marble revetment of the “East-West Corridor” were conserved. The work included the mechanical cleaning of the surface and cracks and the reattachment of sections that had come away. Titanium staples were also used for large fragments. 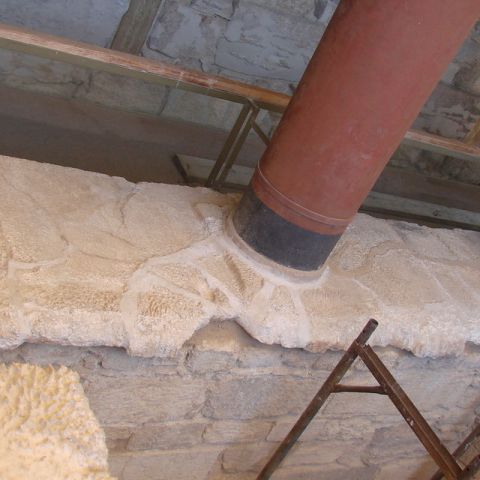 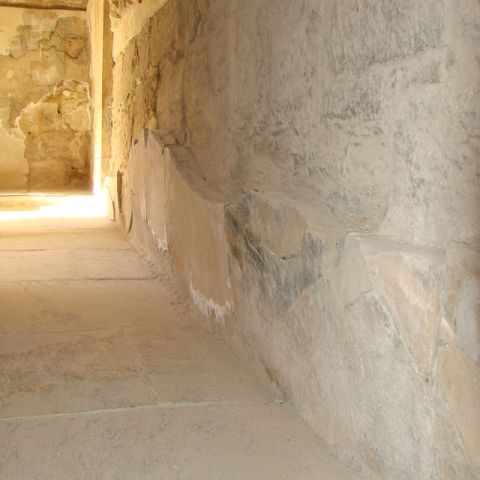 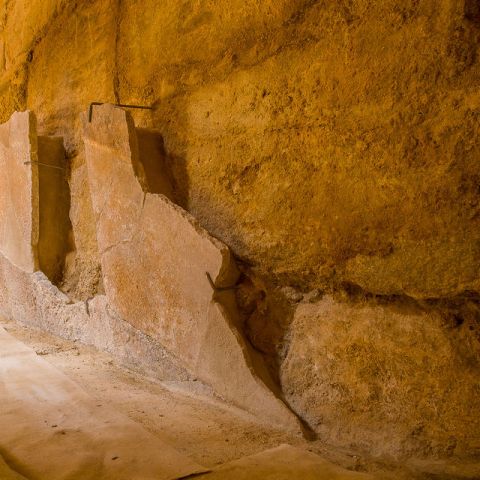 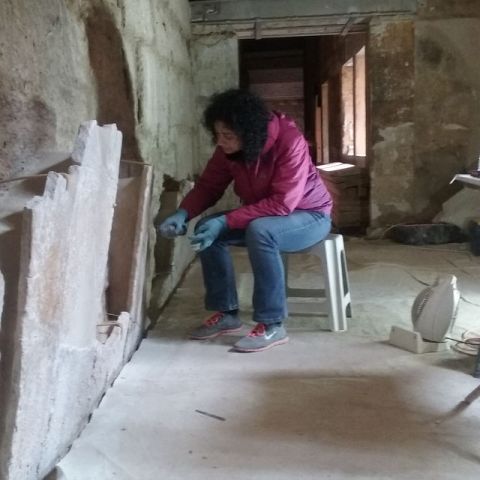 The plaster conservation involved the removal of earlier interventions; joining and consolidation of crumbling and detached sections; binding of the plaster all around the edge; mortar injections to fill the gaps; and finally cleaning of the surface.

The paintwork of the staircase columns of Evans’s reconstruction was also restored. 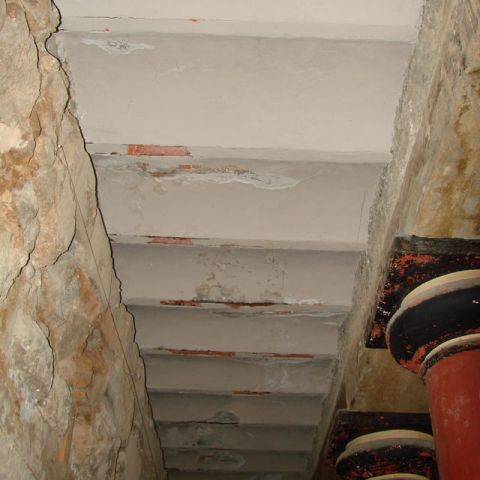 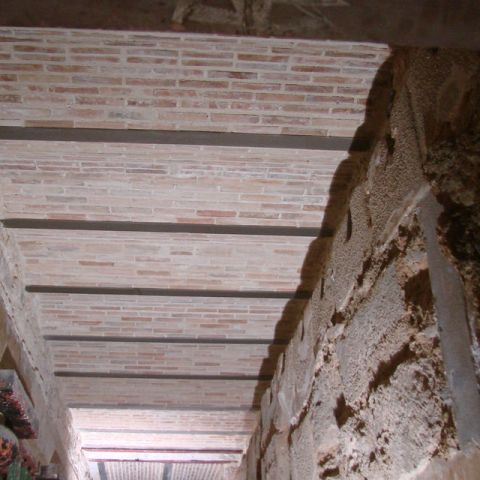 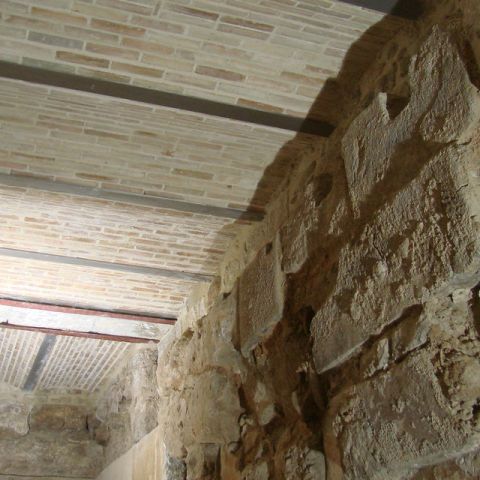