The south part of the Palace was badly damaged and its reconstruction is uncertain. Evans believed that there was an entrance at the southwest end, accessed by a magnificent colonnaded staircase.

Indeed, the massive foundations discovered on the hillside south of the Palace belong to the southern part of the “Stepped Portico” leading to the “Southwest Entrance” to the Palace.

From there, the “Stepped Portico” appears to have continued with an eastwards turn, although a few ruins have been identified further north, at the foot of the hill. Parts of its paved steps were revealed on the slope, just west of the “South House”. It was destroyed by an earthquake in the MM IIIB period and never rebuilt. The “South House” was founded on its ruins shortly afterwards.

In the “South House”, as reconstructed by Evans with three storeys, many of the architectural and decorative features of the Palace are repeated (“lustral basin”, pillar crypt, widespread use of gypsum, etc.). It is therefore considered to have been a remarkable house of the Neopalatial period (1700-1450 BC). The particular topography of this part of the Palace has always caused problems as regards both access to the area and the stability of the building. During the course of the 3rd CSF work, a new rainwater drainage system was constructed in order to prevent water pooling under the shallow foundations of the South House, leading to creep. It was also considered essential to the effective static reinforcement of the monument to reinforce the west slope with a retaining wall of poros stone. Safe visitor access was ensured by constructing a new route and steps. 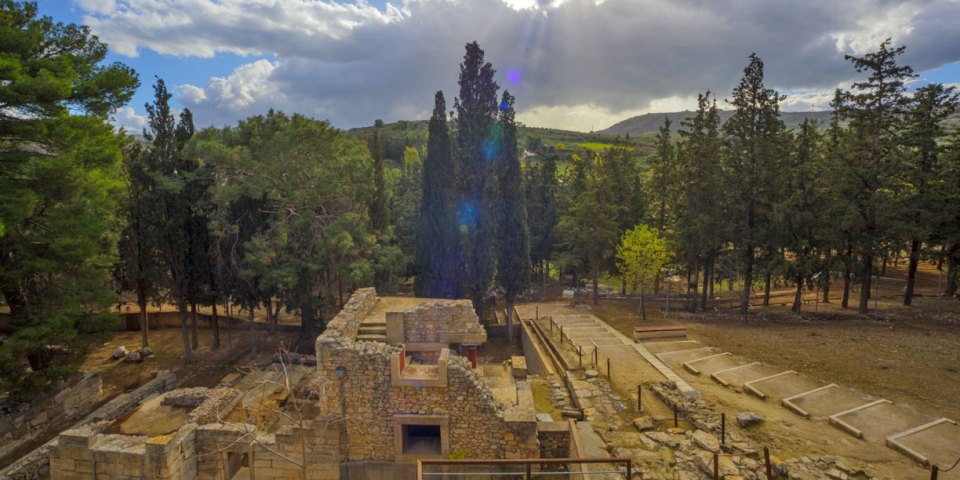 In the context of the NSRF, this existing visitors’ route was extended from the “South House” to the “Caravenserai”. Thus the “Caravanserai” has been integrated with the “Minoan Viaduct” to the north, linking the two banks of the Vlychia stream, and the “Stepped Portico”.